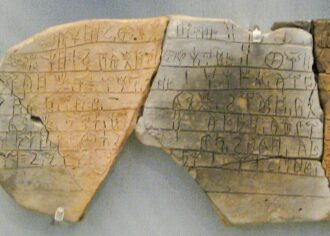 A sample of Linear B script, the earliest Greek writing, 1450 BC, and an adaptation of the earlier Minoan Linear A script. This piece contains information on the distribution of bovine, pig and deer hides to shoe and saddle-makers. It is a script made up of 90 syllabic signs, ideograms and numbers, a form earlier than that used for the Homeric poems. These clay tablets were fortuitously preserved when they were baked in the Mycenaean palace of Pylos fire 250 years later.